Start a Wiki
John Lennon (1940-1980) was a musician that acheived worldwide fame as a member of The Beatles. After the break up of the band in 1970, he had a successful solo career with albums such as Imagine. He was shot by Mark David Chapman in 1980.

Some Time In New York City 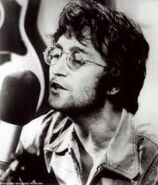 Add a photo to this gallery

Retrieved from "https://album.fandom.com/wiki/John_Lennon?oldid=9607"
Community content is available under CC-BY-SA unless otherwise noted.