Start a Wiki
Quichotte is a live album by German electronic band Tangerine Dream. Parts one and two of Quichotte is actually two live concerts on January 31, 1980 in Berlin, Germany. It was originally released in 1980 under Amiga Records. It was later re-released in 1986 under the title Pergamon by Virgin Records. 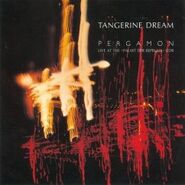 Add a photo to this gallery
Retrieved from "https://album.fandom.com/wiki/Quichotte?oldid=14646"
Community content is available under CC-BY-SA unless otherwise noted.